You love a boy and he loves you too. The birds are chirping, you are whistling, having butterflies, and feel like the luckiest girl in the world. However, as most relationships, things ultimately do not work out and a breakup is inevitable. In the best of circumstances, you can hope to be amicable, cry a little, start having a relationship with a pint of Ben & Jerry’s, and let time heal all wounds.  This simple routine of a breakup is all but a distant memory with the worries that may now accompany a breakup. It used to be that a scorned lover would spread rumors to their buddies after the failed relationship; however, a more permanent and exposed form of revenge has emerged.

Read more »
Posted by The Modern American at 7:18 AM No comments:

The Supreme Court’s 2015 ruling in Obergefell v. Hodges marked one of the greatest victories for same-sex couples in the United States.[1] The Court’s decision in Obergefell invalidated state same-sex marriage restrictions, allowing same-sex couples to legally marry in every jurisdiction. [2] This ruling follows other victories of the lesbian, gay, and bisexual (LGB) equality movement, such as the enactment of the Matthew Shepard Act and the repeal of Don’t Ask Don’t Tell. [3][4] However, despite these national civil rights victories, the LGB movement faces one of its biggest challenges yet, employment discrimination.[5] Currently, there is no federal law that explicitly prohibits employment discrimination on the basis of sexual orientation; and thus although same-sex couples can legally marry, employers in most states can legally discriminate against employees as a result of their sexual orientation. [6][7] In order to ensure the safety of LGB individuals, the federal government needs to enact a federal anti-employment discrimination law, which protects individuals from sexual orientation-based discrimination.

Read more »
Posted by The Modern American at 7:11 AM No comments:

The Unproductive Laws of Productive Rights by Nura Rafati

Justice Antonin Scalia’s passing on February 13, 2016, has raised many questions as to the fate of pending Supreme Court cases and decisions.  One of such cases is Whole Woman’s Health v. Hellerstedt, in which the petitioners bring a claim against the constitutionality of a 2013 Texas law that led to the closing of many abortion services in the state.[1] According to state legislators, the law was enacted in order to set a higher standard of care that aims to protect the health and well-being of women who seek abortions.[2] The impending case is one of many that the Supreme Court has faced with regard to women’s health and reproductive rights, where Justice Scalia consistently voiced a more conservative anti-abortion stance.

Read more »
Posted by The Modern American at 8:32 PM No comments:

Implied No Latinos Allowed: Why Chef José Andrés Should Not Have To Open New Restaurant in Trump Hotel Despite Contract by Maricela Lechuga

Donald Trump’s disparaging comments about Mexicans and immigrants, have offended José Andrés such that he no longer wishes to open a restaurant in Trump’s muti-million redevelopment project in Washington, D.C. As a result, Trump has threatened to sue for performance of the contract, which could include ten years of unpaid rent loss in earning potential.


Read more »
Posted by The Modern American at 2:54 PM No comments:

Plead Out, Get Deported: The Right to Effective Council

The Supreme Court has taken on many groundbreaking cases this term, daring to clarify issues regarding same-sex marriage, immigrant rights, and habeas corpus petitions.[1]  Of particular interest is the case Chaidez v. United States.[2]  This case deals with non-citizen rights following a criminal conviction or guilty plea.[3]  This is of particular importance because once non-citizens are convicted or plead guilty to a crime, they can be deported.[4]  In 2003, Chaidez plead guilty to mail fraud and was subsequently deported.[5]  In 2010, she filed a motion for a writ of coram nobis, asserting that her attorney was ineffective for not alerting her that she would be deported if she plead guilty.[6]

On the 40th Anniversary of Roe v. Wade, The Modern American Looks Forward

Today marks the 40th anniversary of Roe v. Wade. This historic decision secured the right of choice for American women and mainstreamed the abortion debate for generations. The decision declared a fundamental right for women to decide whether to bear children, subject to constraints in the interest of the protection of maternal life or health, and an interest in potential life. Abortion rights have since been limited, but the main effect of the decision is still in place today. As the basic tenets of the decision have stood firm over time, the debate over a woman’s right to exercise control over her own body continues. Since 1973, states have enacted sweeping legislation to further restrict, and in some cases almost ban, access to abortion related services. Similar measures in Congress have failed, but the effects are still widespread, especially in lower income and poverty stricken areas.

Support for Roe v. Wade is at its highest levels in history; seven in ten people believe that the decision should be upheld.[1] Pro-choice groups are actively recruiting candidates to protect and defend the decision in courts and in the political arena. Emily’s List currently has an all day boot camp focusing on recruiting female candidates to run for office who will defend the legal right to an abortion. Even though public opinion generally supports the right to choice in most circumstances, Republican-controlled state legislatures are continuing to pass legislation that restricts this right. Republican lawmakers in Ohio are planning on reintroducing a bill that would ban abortions as soon as the fetal heartbeat is detected, which usually occurs around six to seven weeks into pregnancy.[2] The Alabama Supreme Court recently declared fetuses to be children under state law, and pro-life activists in the state hope they can now prosecute those who seek abortions for child abuse.[3] The long-fought battle for a woman’s right to choose is far from over, but we can be sure that the effects of Roe will continue to be acknowledged for years to come.
[1] Louise Radnofsky & Ashby Jones, Support Grows for Roe v. Wade, http://online.wsj.com/article/SB10001424127887323301104578255831504582200.html.
[2] Laura Bassett, On Roe v. Wades 40th Anniversary EMILY’s List Recruits Female Candidates to Defend It, http://www.huffingtonpost.com/2013/01/22/roe-v-wade-anniversary_n_2525665.html
[3] Jessica Pieklo, Alabama Supreme Court Declares a Fetus is a Child, http://www.care2.com/causes/alabama-supreme-court-declares-a-fetus-is-a-child.html

March 26, 2011 marked a legal victory for mother, Abbie Dorn, when the Los Angeles County Court temporarily granted Dorn injunctive relief holding that she had children’s visitation rights. Severe complications during the labor of triplets led to Dorn’s permanent disability. As a paraplegic, Dorn’s primary mode of communication is through a series of blinks, which, following divorce, the father of the children deemed psychologically harmful to the triplets. The father chose to raise the children on his own, barring Dorn from visiting. Consequently, Dorn has only seen her children three times since their birth in 2006; it wasn’t until last year that the father even told his now-four year old daughters that they had a mother.

The court tentatively found that although Dorn’s interaction with her children is significantly impaired, the children still have the ability to interact with their mother. The court found that such interaction would in fact be beneficial to their psychological growth. This decision is still early in the case’s development, as a full trial is set for later this year. Nevertheless, Dorn and her parents, who filed suit on behalf of their daughter, are celebrating this temporary holding as a sign of the success to come. The fact that the case may end at the county level may limit its effect but the case, nonetheless, marks a notable achievement in disability rights.

--Zannie Carlson
TMA Staff Writer
Posted by The Modern American at 1:31 AM No comments: 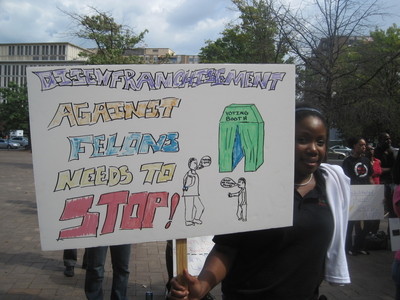